Predictions for Small Business IT in 2016 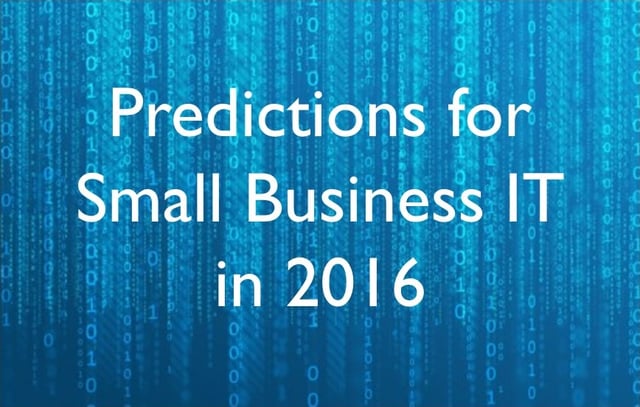 This time of year always brings a slew of articles about “what’s next” – the hot technologies, stocks, real estate markets, movies, music, food – what we should all plan to use/invest in/watch/ eat, etc. Since everyone else is doing it, I figured why not chime in on the topic I spend most of my time in: Small Business IT. So, without further ado, here are my predictions for 2016:

Connectivity will continue to improve

Internet connectivity will continue to improve, getting faster, more reliable, and less expensive. Local carriers (phone and cable companies) continue to expand their fiber optic offerings to more addresses and the cost-per-megabit continues to decrease. For businesses without access to high-speed fiber optic or coaxial service, fixed-wireless and 4G/LTE options and speeds will improve and prove a suitable alternative.

Desktop hardware become a commodity years ago, with Dell, HP, and Lenovo all offering a good selection of desktops, all being equal to the end user. Servers followed shortly afterwards, mainly from the same three vendors. As more and more business services move to a cloud delivery model, they are becoming accessible from any device – desktop, laptop, tablet, web, so not only does it matter less and less who makes the device, but you’ll start to see that the type of device will matter just as much (or as little).

The big hardware companies will try to change

As hardware becomes more commoditized, the big hardware companies won’t want to be in that business anymore. HP has already split into 2 companies (one for servers and business applications, the other for consumer products), and Dell is in the midst of acquiring EMC for $67 billion, selling off other services companies to raise cash for the deal, and figuring out where it wants to go next. Expect a lot more news on this in the coming months.

Unicorns will start to die

In 2015, the term Unicorn stopped referring to the creature we saw at the circus and instead was used to describe startup companies that, through their VC fundraising, valued themselves above $1 billion. Unfortunately, that bubble is starting to burst as some are now publicly trading at valuations significantly lower than when they last raised funds, and others are realizing that they’d better find a way to start turning a profit and stop focusing on their valuation. Let’s see who survives the next 12 months.

Collaboration tools will be hot

One of the darling companies of 2015 (and a Unicorn) is Slack, which provides a system for teams to collaborate that’s not email. There are a handful of copycats, most of which include the basics such as workflow, IM, video chat, and document sharing. The problem is that each is proprietary – the way text messaging used to be (remember when you could only text-message friends on the same cell provider as you?). This year, either someone will develop an API that lets different collaboration tools talk to each other, or a few will emerge as the leaders while the others struggle for market share.

SSDs will become the norm

Solid-state drives (SSDs) keep getting cheaper, take less power, and are more reliable than spinning drives. Much more importantly, they are exponentially faster than their spinning counterparts which we’ve been using since the late 1980’s. There’s no reason to buy spinning drives anymore and I predict that, in 2016, more and more manufacturers will include SSD’s as the default in their computers.

Virtual Desktops will be big

As connectivity improves, hardware becomes commoditized, companies require higher productivity levels from their employees, and connectivity keeps improving, Virtual Desktops (in all forms including VDI, Workspace-as-a-Service, and Desktop-as-a-Service) will start to really grow, as they provide the computing environment that’s familiar to us all, with the benefits of the cloud.

Oil may stay at its current low prices, which will probably force electric car makers to become even more innovative (which is a good thing).